Happy to announce the release of Pwoli.js - The NodeJS version of Yii2

We are glad to announce the release of the first stable version of our NodeJS framework - Pwoli.js

Pwoli is so obliged towards Yii2 and its founders/maintainers as it’s from the Yii2 framework, me who was a Yii2 developer first, learned modern Software Design Principles and got the inspiration for creating the awesomeness of Yii2 in NodeJS.

Pwoli is actually a subset of Yii2 for NodeJS written in TypeScript. The main features of Pwoli are:

As already said, Yii is my inspiration for creating a framework like this for NodeJS and am really thankful to its founders, community, and this forum.

We are also inviting contributions to this framework in the form of Unit Tests, Bug reports/fixes, Feature Implementations, etc. so that you can become a part of Pwoli! 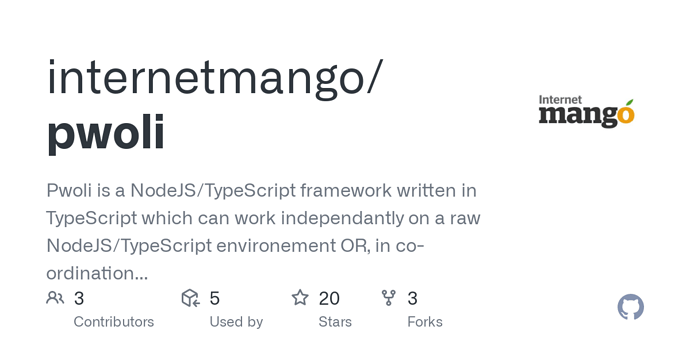 Please don’t forget to star the repo if you like it!

This is awesome. I will dig into it.